Seattle was ranked 5th best dog-city by Newsweek in 2019—there are 96 dog parks to choose from, including one indoor dog park.

And when these householders go on holiday, they need someone to look after their pets and—a house sitter or a pet sitter in Seattle is the very best option for the well-being of the pets—and for the householders' peace of mind.

House Sitters America has been helping Americans protect their homes and care for their pets for more than a decade—since 2008. We offer a service that is secure and easy to use, backed up by award winning support. 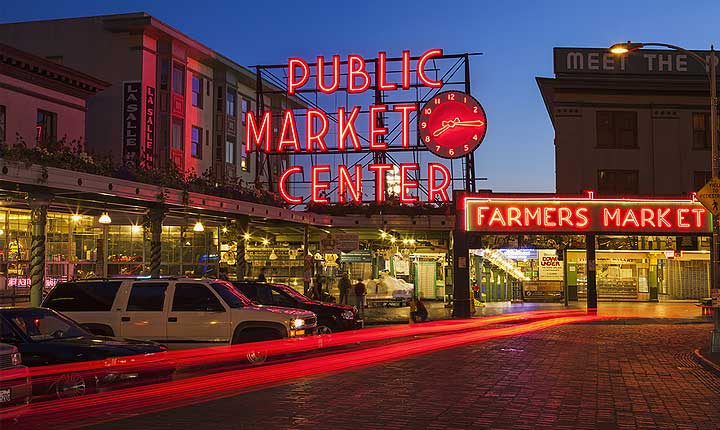 100% free for pet owners in Seattle

Pet owners in Seattle never pay anything to register, place an ad, search for and contact pet sitters or book one in to look after their pets and home.

100% awesome for pet sitters in Seattle

This site is free to explore and easy to use. We provide a secure space for sitters to find house sitting jobs in Seattle or anywhere across the US. 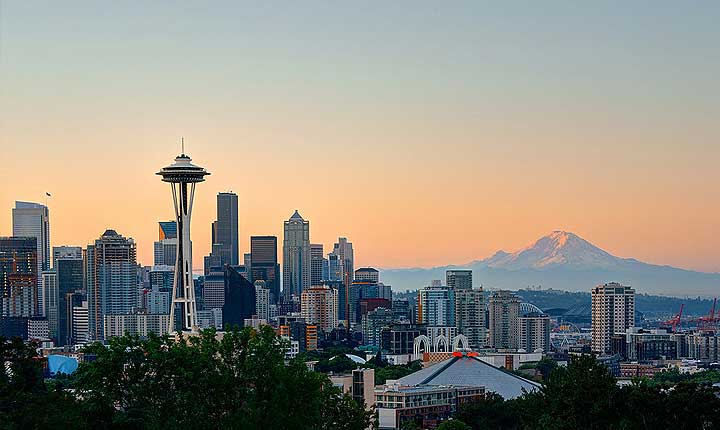 Dancing (& walking dogs) in the Rain

Wrapped around Puget Sound in the Pacific Northwest, the state of Washington’s largest city is home to tech icons like Amazon and Microsoft, and endless water, mountains and evergreen forests too.

It’s called the Emerald City for a reason: all that grows is brilliantly green, the result of an average of 152 rainy days a year. (Not that a little drizzle stops anyone from biking, rowing, hiking, running or walking!)

Downtown Seattle delivers striking views of towering skyscrapers and majestic mountains alike. Savor new creations from globally recognized chefs, spruce up your wardrobe at Nordstrom’s flagship store, sip coffee, or score tickets to the theater, a concert or museum. This culturally rich business district is more “work” than “live,” but some of the historic brick buildings have been converted into multifamily housing.

Savor seafood galore along the Waterfront, where oyster bars, chowder bread bowls and crab pots abound. Rich in history, this neighborhood is home to the Seattle Aquarium, the Great Wheel and the ferry terminals. Newly built apartments here often feature amenities like rooftop terraces, fitness rooms and yoga studios, and a growing network of walking/jogging trails and local parks serve as cultural hubs. Watch out for flying fish as you walk through Pike Place Market, where a little coffee shop known as Starbucks got its start at 1st and Pike.

Capitol Hill is all about diversity. Young or old, grunge or indie folk, gay or straight, it’s all good here. There are old-money, tree-lined neighborhoods galore, as well as apartment communities with all creature comforts a Seattle urban hipster/professional/artist/leader could want. Eateries are abundant—what up-and-coming Millennial has time to cook, right?—and so are bars and night clubs. It’s a walker’s paradise, which is great. Like the rest of Seattle, this is where dogs (as well any creature with fur, really) rock the worlds of their human companions.

Besides snow, slopes, and trails, locals and visitors also have the chance to experience the Canadian Wild West in the Heritage Park. If you love sports and competition, the Saddledome hosts games between popular Canadian league sports teams.

After the adrenaline rush, people can indulge themselves along the Stephen Avenue Walk for some shopping and leisure. Families let their children have their own fun time in the Calgary Zoo to check out animals, stroll around, and play. 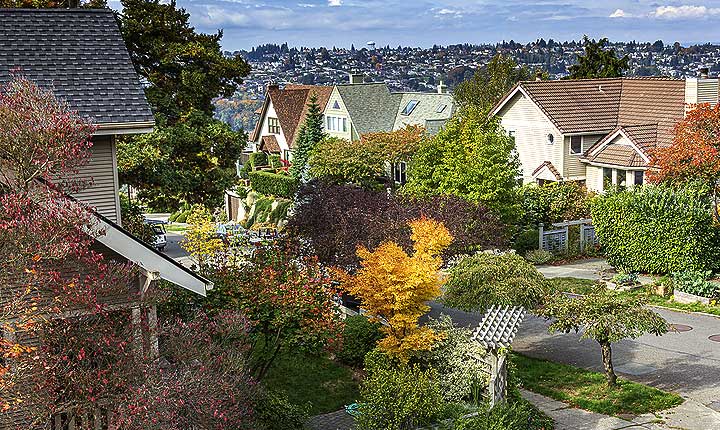 When you think of picture-perfect Victorian homes lining a well-shaded hill overlooking the Sound, you think of Queen Anne. We ALL want to live here when we grow up. Like Capitol Hill, it offers easy access to Downtown and a “small town in a big city” feel. Wherever you stay is practically guaranteed to be within walking distance of some of the hottest restaurants in town. It’s also home to the Bill & Melinda Gates Foundation and Kerry Park, which offers sweeping views of the Space Needle, Elliott Bay and downtown as you enjoy your daily dog walks.

If you’ve ever dreamed of living in a high-rise condo with amazing views of the water, with restaurants, nightlife, shops and more within walking distance, Belltown is for you. Young, urban professionals love easy access to downtown, Capitol Hill and Queen Anne. Best of all, you can walk your furry companions to the Sculpture Garden, a waterfront oasis paved with biking and walking paths, and even a few natural sand beaches. Fair warning: the area can get a little sketchy after the bars and restaurants close, so it is best to take dogs on walks before night fall.

This is the oldest neighborhood in Seattle, and its cobbled streets were considered “skid road” not that long ago. While there are still a few panhandlers, drifters and drunken club-goers, an infusion of investor money and residents willing to live among the constant stream of tourists on walking tours have brought a new, revitalized gleam to the neighborhood. The alleys are increasingly filled with cool new restaurants and upscale speakeasies, as well as newly revitalized apartments and condos. It’s still a work in progress, but definitely on the other side of gentrification.

Apartments continue to rise up by the Center of the Universe at the intersection of N. Fremont and 35th Street N. (A group of scientists, post ale-house, previously named this point the Center of the Universe based solely on the scientific theory that this theory could neither be proven nor disproven.) North Fremont is more residential and full of houses, and there are great parks within walking distance. 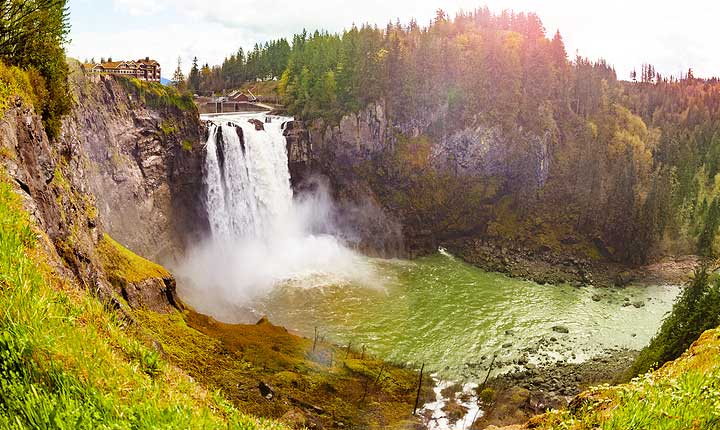 Accessible to the mainland via the Agate Pass Bridge in addition to direct ferry connection to Seattle, Bainbridge Island is one of the most idyllic communities in the Pacific Northwest. Filled with charming homes, excellent schools and parks galore, you can even fall asleep to the sound of sea lions barking at night. Small pets must be watched at all time—the coyotes are brave and the raccoons surprisingly vicious, according to local lore. And you may have to shoo the deer away if you are watching over a garden. The population is overwhelmingly in the post-50 range, and sweatshirts (preferably purchased from the local feed store) and good walking shoes are standard everyday attire.

This is island living at its finest. The weather is mild, the setting idyllic and the small-town feel is inviting and welcoming. Get ready to slow down and soak up a creative spirit in a gorgeous natural setting. Whidbey Island is home to poets, artists, musicians and more. Deer are everywhere and will munch on gardens every chance they get, and locals swear that every coffee shop in any town on the island is no more than 316 steps away from the next coffee shop. The ferry takes you off and on the island, so you’ll need to check schedules. But really: will you want to leave?

A few miles north of Seattle, Lake City may seem, at first glance, off the beaten path. But it is home to Dogwood Play Park, Seattle’s original dog park and bar. Chug a cold one and splurge on some handcrafted dog treats for your furry companion after they romp around and make new friends on the indoor and outdoor doggy playgrounds.

Rain or shine, Seattle is a wonderful destination for an adventure-filled getaway. Pack an umbrella (just in case), and you are on your way.